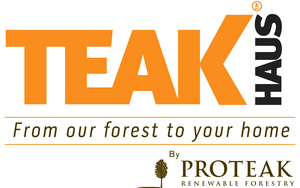 Proteak commenced its renewable teak operations in 2000, when the company began planting teak trees on reclaimed ranch lands in the state of Nayarit, roughly three hours northeast of beautiful Puerto Vallarta on Mexico’s Pacific coast. This region was chosen for its soil and precipitation characteristics, which closely mimic teak’s best growing regions in Southeast Asia. These ideal growing conditions allow Proteak to cultivate its trees without the use of irrigation or fertilizer, thereby producing top-quality teak with minimal impact on the environment.

Less than 6 years later, Proteak’s plantations were ready for their first thinning. During this process, up to 50% of trees on a plot are harvested with the purpose of both extracting timber and also opening up the canopy to allow sunlight and open space for the remaining trees to mature.

After this first successful thinning, the lumber was milled and kiln dried to prevent warping and ensure stability. Due to the relatively small dimensions of the lumber cut from the thinning, as well as the stunning contrasts of the young heart and sapwood, Proteak decided to focus production efforts on cutting boards, carving boards and butcher block carts. After forging a strong network of national sales and marketing representatives, Proteak began to sell these houseware products under the brand Proteak Renewable Forestry.

Upon the launch of its cutting board and butcher block lines, Proteak was greeted with enthusiastic success and feedback, with many its products being carried by a number of the nation’s top retailers. Following the success of its kitchen lineup, Proteak has now expanded its offerings to include teak decking, countertops, and with the founding of Teakyard.com, even teak lumber.

Environmental and social sustainability have been cornerstones of Proteak’s guiding philosophy since day one. Shortly after cultivation began, Proteak was awarded a Forestry Management Certification from the Forest Stewardship Council (FSC), affirming Proteak’s dedication to ecologically sound forestry techniques. In addition, Proteak seeks to stimulate the agricultural community by providing quality jobs with fair wages for workers in a traditionally low-income area of Mexico.

Proteak now holds some of the largest teak plantations in Mexico and one of the largest in the western hemisphere. With over eight thousand acres under cultivation, Proteak is positioned to be the most reliable source of sustainable plantation teak and teak wood products for years to come.